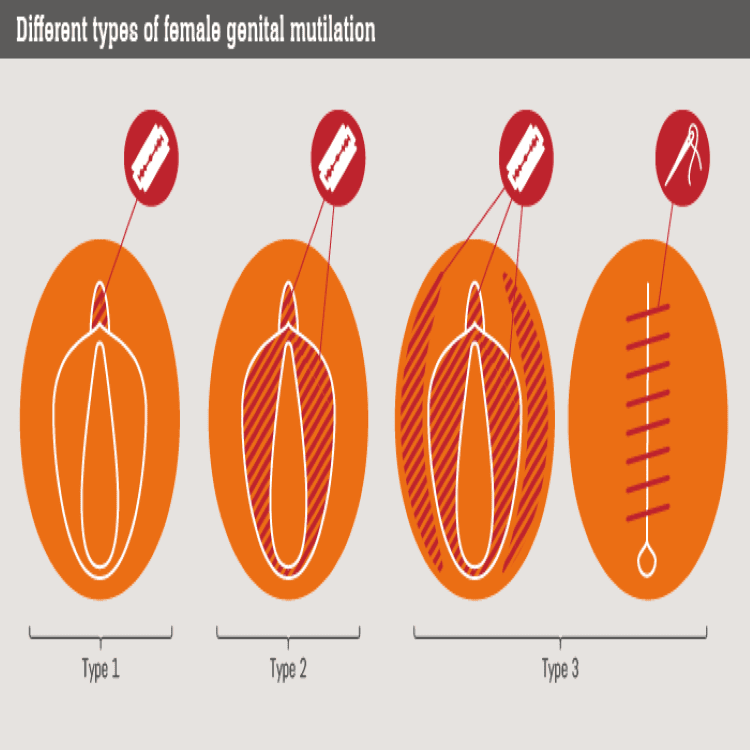 Say “No” to Female Genital Mutilation!

FGM is a process in which there is a removal of some or all of the external female genitalia.

Female Genital Mutilation practices are chiefly found in Africa, Asia, and the Middle East and within communities from where it is share.

FGM practiced as a ritual in some of the countries. It has conducted from days of birth to puberty and beyond.

Most of the girls cut before the age of five.

FGM involves deletion of the clitoral hood and clitoral glans, removal of inner labia, deletion of outer labia, and closure of the vulva.

FGM practice is rooted in gender inequality, attempts to control women’s sexuality and ideas about purity, modesty, and beauty.

There are types of FGM:

It is the complete or partial removal of inner labia. It involves with or without removal of the clitoral glans and outer labia.

It is a sewn closed category. It includes the removal of the external genitalia and the fusion of the wound. The inner and outer labia are cut away, with or without removal of the clitoral glans. According to the 2008 estimation, over 8 million women in Africa are living in type III Female Genital Mutilation.

Type IV FGM is another painful procedure for female genitalia for non-medical purposes. It includes pricking, piercing, incising, scraping, and cauterization. It is every day in southern and eastern Africa.

May cause chronic back and pelvic pain.

If not treated, such infection can ascend to the kidneys, potentially resulting in renal failure, septicemia, and death.

It occurs due to an obstacle in the urethra and recurrent urinary tract infections.

It occurs due to uncontrolled scar tissue can form at the site of cutting.

The transmission of HIV facilitated through the trauma of the vaginal flesh that allows the direct commencement of the virus. It is reasonable to presume that the risk of HIV transmission may be increasing due to an increased risk of bleeding.

Female Genital Mutilation (FGM) also violates a person’s right to be healthy, security and physical integrity, right to be free from ill-treatment and uncaring, inhuman or demeaning treatment, even the right to life when the action results in death.

So there should be an end to FGM practices, and it should be treated as a crime and not as a ritual.