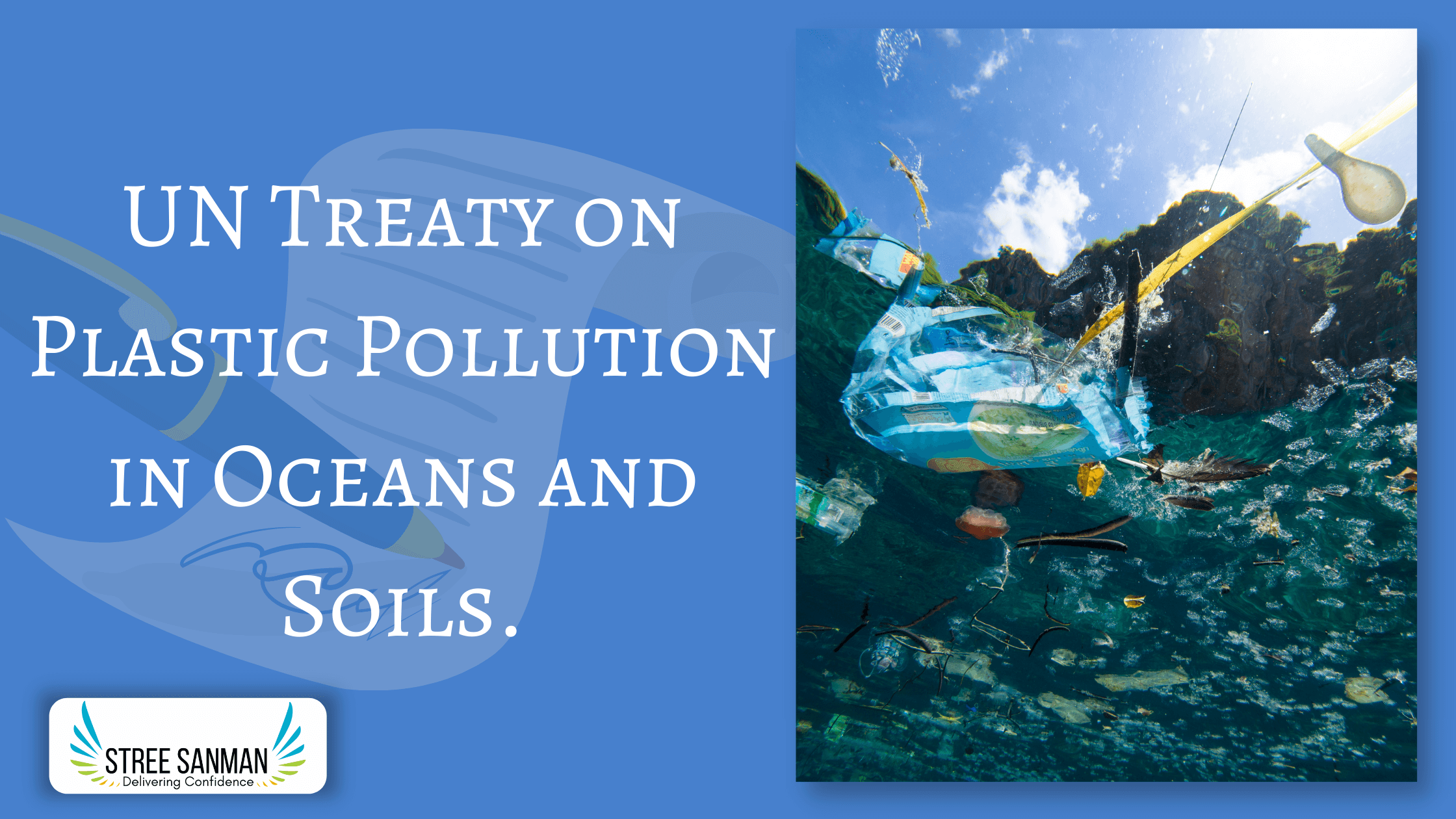 UN Treaty on Plastic Pollution in Oceans and Soils.

Today, most of the materials we use in day-to-day life are made of plastic. It is estimate that, on average, a person produces 105kg of plastic waste per year. All these wastes are either dispose off in the garbage bin or thrown in the ocean and nearby river bodies. As plastics are unnatural products, there are no organisms capable of decomposing the material. Due to plastics lacking decomposable capacity when disposed of in oceans harms the aqua and marine life. The notable impacts of plastic debris are the ingestion, suffocation, and entanglement of millions of marine species. Most marine life, namely, seabirds, whales, fish, and turtle, mistakes plastic waste for prey and die due to starvation because their stomachs become filled with plastic.
Remains of plastic material on land harm the environment. As there is a constant rise in plastic pollution, and it’s an estimation that it will keep increasing in the coming future, the UN has approved a landmark agreement to create the World’s first Global Plastic Pollution Treaty.

What do the Global Plastic Pollution Treaty states?

The report states that plastic pollution has increased; globally from two million tonnes in 1950 to 348 million tonnes in 2017. Further, it is estimate that plastic pollution will rise to 600 million tonnes in 2024. The study reveals that around 11 million tonnes of plastic waste annually end up in the ocean; and it could triple by 2040 if immediate action is not enforced. Also, the total amount of plastic waste produced globally has more than doubled since 2000 to 352 million tonnes; stated by the Organization of Economic Co-operation and Development.
However, the disposal of plastic is only 19% of incineration, 50% end up in landfills; 22% is either dump in irregular sites, burnt in open spaces, or leaked into the environment. Only 9% of plastic waste is recycle. To stop these unhealthy plastic disposal practices, Global Plastic Pollution Treaty is launch. Under this agreement, an intergovernmental negotiating committee will be convened to develop an international; legally binding instrument on plastic pollution, including the marine environment. The committee formed will start working on the agreement in the second half of the year with the ambition of achieving its work by the end of 2024.

To control plastic pollution, the measure includes limiting the production of virgin plastic, the phasing out of single-use products, and the requirement to recycle. It is mandatory to develop binding and voluntary measures, set global targets, and produce mechanisms for tracking processes and ensuring accountability. The resolution also states to provide financial assistance to help developing countries initiate the action.
Dame Ellen MacArthur, the record-breaking yachtswoman who runs environmental foundations, stated that the resolution is a critical moment in the effort to eliminate plastic waste and pollution on a global scale. She further noted that the mandate agreed by UN members should open the door to a legally binding treaty that works with the root cause of plastic pollution and not just the symptoms.

One hundred seventy-five countries agreed to develop the first legally binding treaty on Plastic Pollution. With the help of this treaty, millions of tonnes of plastic would be prevent from contaminating the ocean, soil, and air every year. Launching the plastic pollution control treaty is just a starting point, but we as a person can minimize using plastic products. If we use plastic products, we must avoid disposing them in landfills or river bodies. We must adopt eco-friendly solutions such as using Eco-friendly Smokeless Incinerators to dispose of plastic waste.